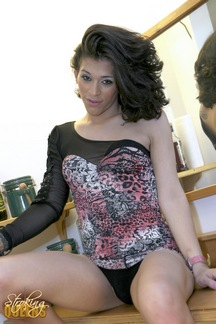 New York City is where you’ll find Miss Angela Skye, dancing and giving lap dances at the most popular weekly tranny parties. You can also see Angela in her sexy debut adult modeling sets at Stroking Queens, as well as upcoming scenes for Shemaleyum.

She is known to jerk off as much as four to five times everyday, she had no problem getting herself up and off when the cameras were rolling.

You can look for more scenes of Angela Skye coming soon to Stroking Queens, as well as other top transsexual adult websites, she is definitely a star on the rise.