Skip to content
You are here
Day 1 – Shoots And Party 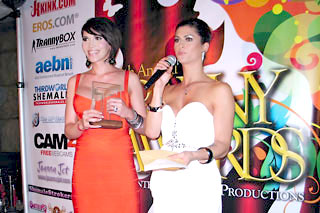 When I was asked to judge this years Tranny Awards, I decided a trip to Los Angeles to attend the award ceremony would be a fun compliment to the whole experience.

After a pleasant lunch with the girls we were off to the Grooby offices, when we arrived we were met by none other than Frank of Frank’s T-Girl World as well as Hiroki, who is the photographer for Shemale Japan, he was also in town for the awards show. Now I was ready to get to the hotel and check in, just enough time to unpack, brush my teeth, then off to a hardcore photo shoot with Britney and Tempest which would be followed by a party at director Buddy Woods house….(to be continued)