Skip to content
You are here
Hardcore Shoot – Party 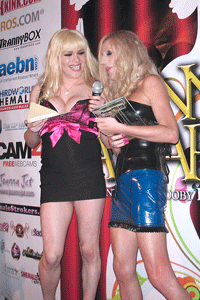 Tempest has had her own site on line for a while now, but has just completed a re-design and is now available as TS Rockdolls, which is a very unique and lusty site featuring herself and her kinky friends. Both of these t-girls are kinky that’s for sure, and real pros too, when Tempest said she would deliver her cum-shot in 2 minutes, damn if she didn’t deliver it in 2 minutes.

Next up was the pre awards party at Buddy Woods house, barbecue was provided by TS Morgan Bailey, and it was quite good I might add. I met Buddy in NY a couple of years ago before I knew who he was, I’m glad I was able to meet up with him again as he is a very cool guy and a very genial host. I also got to meet my girl TS Jesse, who is such a sweet girl and so attractive, that was a personal highlight.

It was a very laid back party, good food, wine and cheese, and plenty of naked t-girls dipping in the hot tub. Miss Liberty Harkness and Joanna Jet came over from London and Miss Liberty is so funny, she doesn’t just flirt with other t-girls, she makes certain she grabs their crouch before she kisses them….(to be continued)